Audhumbla and the Norse Mythology Gods

Who knew that the gods’ lives began with the birth of a primordial cow in Norse mythology? After discovering the life of another entity named Buri in the stones that she licked, Audhumbla was the cow that nourished the giant Ymir.

How could Audhumbla lick the life out of a god while licking the salt out of ice? Where does the cow come from, and how does the giant Ymir survive the nothingness?

It would be confusing if you don’t know where she came from and what she did to make it happen. See the rest of this article to learn more about her life and her connection to the Norse gods.

The Life of Audhumbla and Ymir: The Very Beginning of the World

The birth of Audhumla emerged from the Ginnungagap, which means the yawning emptiness. But her exact place came from the ice in Niflheim, the place that is full of ice. From her birth, she fed one of the frosted giants named Ymir.

Ymir relied on the cow’s udders to survive. And because she needs to feed herself, too, she licked the icy molten rocks. This pattern went on until Ymir became a giant, and she discovered a hair and then a man’s head. As for the third day she fed on the ice, Buri emerged from the ice that she was licking.

The fascinating fact is that Ymir is both a female and male giant, and his reproduction happens in his armpit. Because of the combination of the sweat and the air of the fire counterpart of Niflheim, Muspelheim, the life of several jotunn (giants) emerged.

On the other hand, Buri paired himself with other giants, so they gave birth to a son named Bor, and Bor eventually married one of the giants’ offspring.

They eventually had children named Odin, Vili, and Ve, playing a significant role in Norse mythology from that marriage.

Though Audhumbla was no longer included in the more recent narratives about the Norse gods, she provided the frost god’s nourishment to reproduce their children and fill the void with giants and gods.

The Norse Mythology’s World Creation by The Three Gods 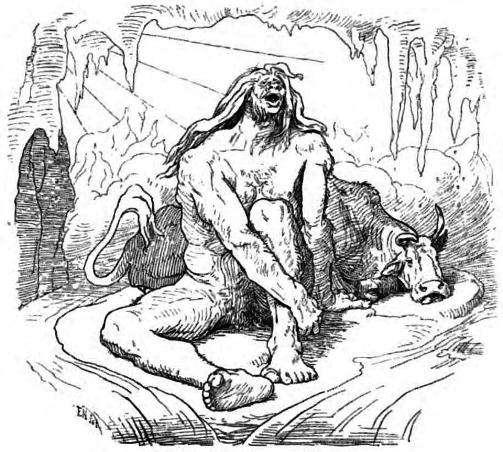 Ymir’s blood became the ocean while the dirt in his body served as the land while his bones were made to be the rocks. Interestingly, the three gods also made Ymir’s skull the heaven, and his brain toiled as the clouds in the sky.

From this, they created even more realms resulting in nine worlds in total. Jotunheim (The realm of giants) is where the giants live on the edge of the world.

The Existence of the Early Human Lifeforms

There had been a division between the gods and the humans. The gods live in a world of Asgard, and they created the first humans out of the trees of Ash and Elm.

It was Odin who is responsible for human life while Vili is the one who gave them the mind to think, and Ve gave them the senses of hearing, seeing, and speaking. They are named Ask and Embla, but some sources also say they are regarded as Ash and Elm. They are placed in Midgard, while the gods live in Asgard.

Midgard is translated as middle earth in English, and that is where the humans dwell. However, in Ragnarok, when the gods have to fight with the Midgard Serpent who will emerge from the ocean, Midgard would be destroyed.

Ragnarok is a series of events that will end mankind, including the death of the gods. As stated above, it could be happening from natural disasters like a colossal serpent coming out of the ocean, and the world will drown in the water.

However, to prevent that massive disaster from occurring too soon, the gods are doing everything they can to protect the humans and save them from meeting their eventual demise. But who are the key gods of Norse mythology, and what is their significance?

The Norse Gods of Asgard

To further understand their roles in Norse Mythology, you must know the difference between the Aesir and the Vanir.

The Aesir gods live in Asgard. They are the pivotal gods in Norse mythology, and the one-eyed Odin was their king. Odin looks over the nine worlds with his sons Thor and Balder.

While Vanir is the goddess of Norse mythology, they had been included in the Aesir-Vanir war that happened before. But in the end, when they found out that neither of the parties could win, they agreed to co-exist with each other.

Is the king of all gods associated with the acts of healing, death, knowledge, poetry, and even sorcery. The god only gave one eye, and he has a long beard. Other than that, he is also the ruler of the Valkyries and Valhalla.

Freya or Frigg in the later mythology is the mother of Loki, Thor, and Baldur (Balder) and the wife of Odin. She is a member of the Vanir tribe, and she is known for love, fertility, and beauty.

He is the son of Odin, who rules over thunder, lightning, and war. He is often depicted as the god who uses a hammer called the grinder Mjolnir, with his ill-temper and promiscuous life.

Balder is the other son of Freya and Odin, who is their favorite of all. He is prophesied to be killed by mistletoe, and unfortunately, his brother Loki led him to his fate despite his father’s protection. But even though Balder had died, he was brought back to life.

Meanwhile, Loki, on the other hand, is the devious god of Norse mythology. He is not favored by his father because all he ever does is trick the gods and the mortals, but he is definitely knowledgeable about the things he does.

Another deity of the Aesir tribe is Heimdall. He is the god of keen eyesight and hearing who protected the gods and became the guardian of the Nine Worlds. He is otherwise known as the shining god because he has the whitest skin.

Tyr is the god of war and justice in Norse mythology. He lost an arm in his battle with the wolf Fenrir, but despite his prominence at the time, he became a less popular god.

Nerthus is like Tyr, who is a minor goddess in Norse mythology. She represents peace and prosperity, and some tribes were celebrating her peace by performing a cart ceremony.

In the end, it is really fascinating how Norse mythology has played a role in the creation of the gods and even humans. If it were not for the primeval cow Audhumbla and the giant Ymir, the world that the three gods did would cease to exist.

Norse mythology has served as an inspiration in the later types of literature like the films Marvel creates. But for sure, it is more interesting to know what is written about the culture of the primordial Germanic tribes because it is more stated in literature such as books and their tales rather than the whole picture in the movies.